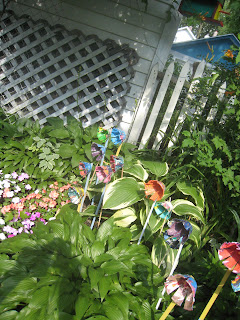 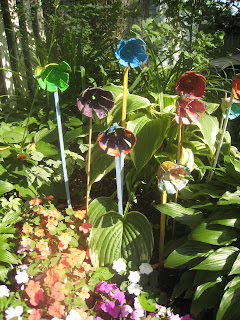 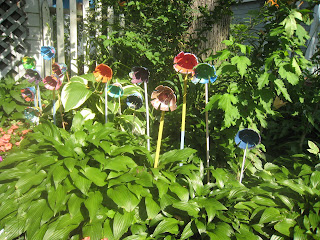 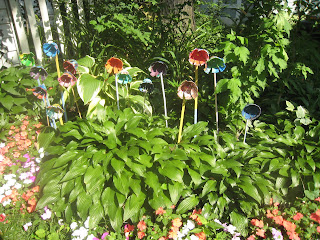 I have done dozens of painting programs with students over the years. We use brushes and paint but what do we put the paint in when we paint? Small plastic cups. Although they can easily be disposed of (and recycled) after each class I keep them to reuse over and over and over time, with much use, colorful layers of dry paint begin to build up on the w

alls of the cups.

Sometimes through ware and tear a cup will crack, or break. In short, they are no longer usable, at least to hold paint. But I discovered another use for them. I saw something somewhere where the bottoms of plastic bottles were cut out to create flowers. I looked at my paint cups and thought, why not these as well? I found that cutting the paint layered plastic with ordinary scissors not impossible but difficult. But a tin snip was perfect for doing the cutting. Then bending the flaps back to create petals I would secure the flowers to dowels with thumb tacks. In moments I planted this forever garden amidst the hostas. The best part is that the flowers bloom all year round with or without watering.

Posted by jlfranklin4 at 9:27 AM No comments: 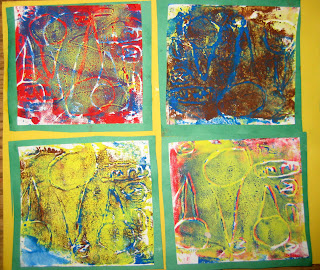 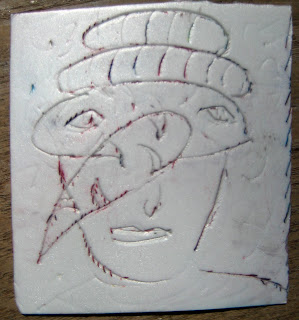 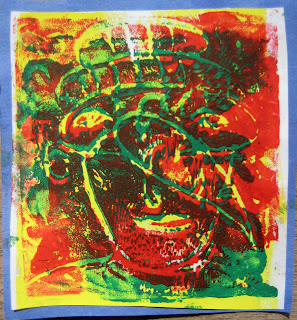 I love printmaking even though my actual printmaking career was quite short-----about three years. But I still love the process of creating images making impressions and layering lines and colors. I was conducting an after school program with 3rd and 4th grade students who had never knowingly created any kind of print until I asked them if they had ever walked in mud or snow and looked at the impression that their shoes had left behind. Oh yeah, foot prints. The art work that I wanted to create with them was not so different than what the feet left behind.

Because the surface on which the prints were to be made was identical to the trays that are used to package chicken and some vegetables in grocery stores, I called them Styrofoams. The students sketched drawings that were then retraced onto the Styrofoam leaving lines that were etched inot the Styrofoam, which is quite soft, to collect ink.

As a demonstration I created a quick drawing which I then traced onto the Styrofoam. I applied yellow with a brayer (a roller) to the Styrofoam plate pressed the plate onto a sheet of paper. Then I washed the plate and applied a layer of red which I followed with a layer of blue. The results were quite exciting. The entire process from drawing the image to printing the three colors took me less than five minutes. Talk about instant prints and instant gratification. The kids couldn’t wait to their hands into the prints. The best part is that their work was so much more interesting than mine. Check out the four 'Ice Cream Cone' prints made by a little boy named Angel.

Posted by jlfranklin4 at 9:48 AM No comments: