In 1970 my family moved to Djakarta, Indonesia. I was in the midst of finishing up my senior year in high school and beginning to enjoy my new found freedom. I took piano lessons, learned to play a bit of tennis, and traveled. On and off over the years my mother had said that I had an affinity towards making art because she had seen how proficiently I copied the drawings and cartoons in MAD Magazine.

Down the street from us in front of someone’s gate was a large wooden sculpture that reminded me of an egg. She encouraged me to go down the street and introduce myself to the artist who created it which I did. Mr Hadi, the creator of the piece turned out to be a warm, gentle, humble, but very accomplished artist. I would visit him once a week or so and he would give me material and I would attempt emulate what he was working on… or not. Having had no art training or education at all, aside from my little cartoons, I experimented with subjects and images, some humorous, others imaginary, and others more literal.

The Trumpeter was my first painting. When I kept failing to paint a recognizable trumpet I opted for a bottle of alcohol. Why? It’s hard to say. It probably seemed easier to paint.

‘Big Man On Campus’ is of the same vain: a ridiculous looking figure straight out of MAD Magazine.

Cousins was based on three scratching instruments that Mr. Hadi had in his studio. He had painted a much more sophisticated version of this using a combination of painting and batik.

The View was based on what I could see from on top of our water tower in the back of our house: Densely packed homes amidst a lot of trees. In the distance were the mountains and in the foreground, a mosque. In reality it was a church but I thought in honor of living in a Muslim country, I would make the church into a mosque.

The Mask is a copy of a mask worn in any number of folk dancers.

Tukan Man was my attempt to emulate Mr. Hadi’s work, painting oil over wax. There were many small merchants who carried their ‘wares’ on their shoulders who passed by everyday on the street in front of our home . This was the fruit merchant, the Tukan Man. Or at least that is what we called him. shoulder.

Riwan. Chicken fighting was popular although fortunately I never saw it. Riwan was the name of the man who worked in our home. I used him as the model for the picture.

Mozart is my first attempt at drawing a portrait. I think I was looking at a small bust of Mozart sitting on our piano when I drew it. He still looks like something out of MAD Magazine.

Pen and Ink God. This is small sketch I made using water color and pen and ink. I was looking once again at a small statuette.

This collection of work is what I used to apply to the art school at the University of Michigan. Apparently they must have seen something in it, and fortunately they did because almost 40 years later I am still doing it and going strong. 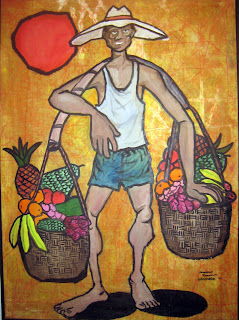 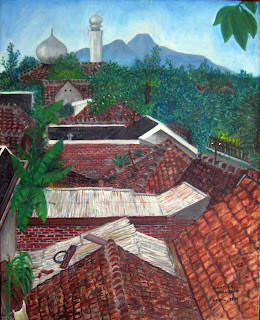 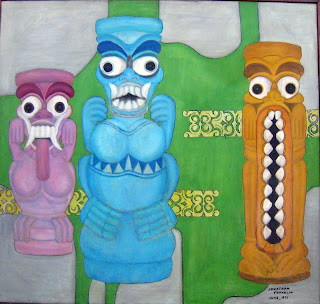 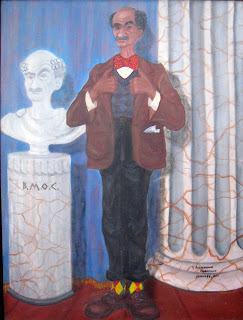 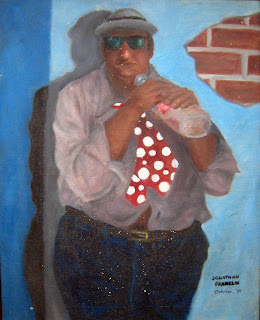 Posted by jlfranklin4 at 9:17 AM No comments: 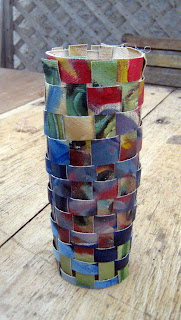 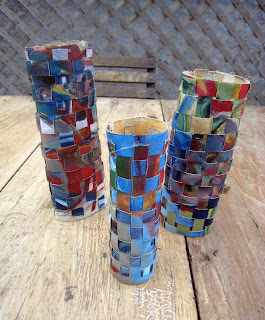 Over the years that I have painted on canvas, there have been a few (very few) instances where I have had to abort the painting. I remember in one case the paint medium I was problematic and prevented some of the paint from drying properly leaving it perpetually tacky. I ended up cutting it into what became the figures I used in my 'Walk-About' series. Other parts of the canvases I simply rolled up and put away. I recently found some remnants tucked away and it occurred to me that just as I had been able to reinvent my rejected gyclee prints by cutting them apart and weaving them back to together again, I could do the same thing with my discarded remnants of painted canvas. I call them Towers.

Posted by jlfranklin4 at 9:56 AM No comments:

Mark Twain and The Purloined Planks

TOM SAWYER’S FENCE: The mystery of the ‘Purloined Planks of Hannibal’

Recently, I was scavenging in an alley looking for some scraps of wood to make some shelves. Not to far away I found upon a bunch of debris that looked as though it had been part of someone’s dismantled porch. There were three panels in particular that were already nailed together and looked to be a perfect size for what I needed. As I picked them up I noticed the initials TS scratched into one of them. I didn’t give it much of a thought as I carried the wood home. But it wasn’t until I found another set of initials that my jaw dropped. Huck F. Huck…F? Huck Finn! Oh my gosh, TS, the other initials must have stood for Tom Sawyer.

The funny thing is that I had just read an article by George Stewart titled ‘The Purloined Planks’ which recounted the story of how some of the wooden planks from Tom Sawyer’s fence mysteriously disappeared shortly after Mark Twain’s death. The perpetrators were never caught, the planks were never recovered and the case of remained an unsolved mystery .

I found it hard to believe that these three pieces of wood that I just happened to find could possibly be those missing planks. But when I noticed a yellow seal stuck to the back of one of them which read “Genuine Authentic Planks “ my doubts disappeared. These were the ‘Purloined Planks’ that I had read about in the article, the real deals. Almost immediately I contacted the Mark Twain Estate and understandably they, too, were at first a bit incredulous. But after I had described the planks in detail, mentioning the initials, as well as the seal of authenticity on the back they, too, were convinced that what I had found were, indeed, the genuine articles.

Arrangements were soon made to return the Purloined Planks to Hannibal. However, when I had mentioned the upcoming commemorative exhibition celebrating Mark Twain on the 100th anniversary of his death, they insisted that the planks be included. And so, the Oak Park Public Library has been bestowed with the great honor of exhibiting , for the first time ever, the Purloined Planks of Hannibal.

In an unexpected gesture of generosity the Mark Twain Estate insisted on sending up the original brush that Tom had used to whitewash the fence. Because this is the first time that the brush will have been exhibited outside of Hannibal, Missouri a special team of security agents was to remain on site. However, to make the presentation less intrusive the library opted to install special security system instead. Although patrons will not be able to touch the actual brush a reproduction of it is provided for them to handle. And should they desire, a bucket of transparent whitewash is available if they should have the urge to ‘paint’ the Purloined Planks as well. 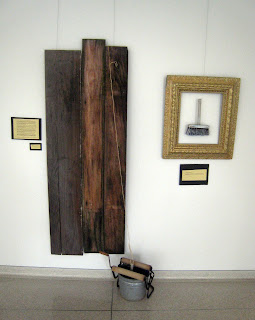 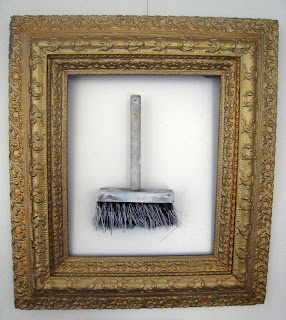 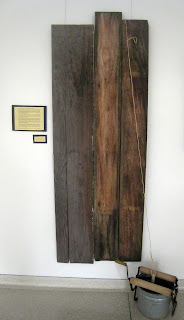 Posted by jlfranklin4 at 8:28 AM No comments: