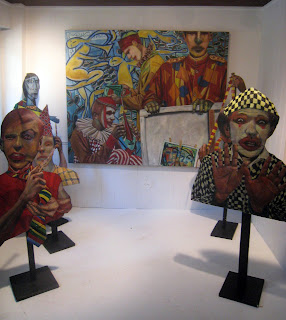 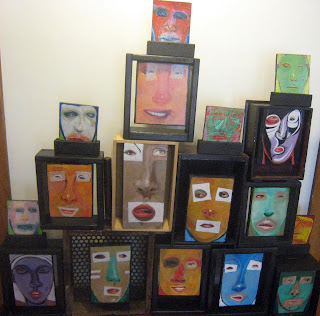 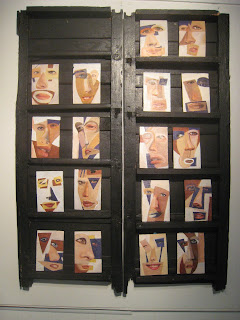 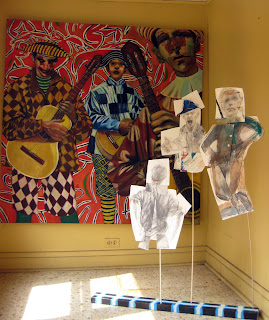 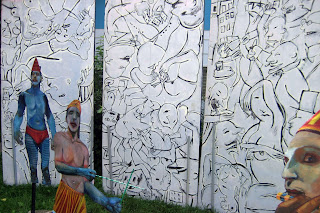 As a visual artist accustomed to typically hanging two dimensional paintings on walls in traditional settings, I jumped at the opportunity to exhibit at Tom Burtonwood and Holly Holmes' Home Studio/Gallery, What It Is. Their space offered me a chance to present my work in configurations that I've thought about but haven't been able to realize until now.
Years ago as part of an exhibition I had suspended cut out canvas figures around pieces of furniture. It added a different dimension to both the space and the furniture. This is the same idea that I wanted to reexplore at What It Is. On both the front and back porches of Tom and Holly's home I arranged free standing figures in front of two larger paintings. The front porch features a grouping of collaged canvas figures mounted on wooden stands called Walk-Abouts, that I described in an earlier blog, stand arranged in front of a painting called 'Show Time.'
Behind them is a piece comprised of small cubist collaged portraits that I call 'Cosmo Girls' because the features (eyes, noses, and mouths) were cut out from my daughters' Cosmopolitan Magazines. The piece itself is created from an old dresser that disassembled and cut apart.
Next to the Cosmo Girls is a small self-portrait homage to Alexander Calder made from recycled bits and pieces.
In the dining room is an assemblage of framed Cosmo Girl portraits that I call 'Boxes' because they are mounted in free standing boxes and frames. Although they are stylistically quite different from the other Cosmo Girls assembled in the old dresser, both series evolved from the same source: Cosmopolitan Magazine.
On the back porch is another painting/figure installation. But these figures called 'Remnants' are collaged drawings that I also described in an earlier blog created from disparate parts of cutout drawings that are secured together with string instead of glue. They are suspended on dowels set in front of the painting that titles the show, "Inside Outside.'
And finally, in the backyard, are a series of large panels that I described in an earlier blog. They were originally created as part of set for a production of 'The Three Penny Opera.' Here in the backyard I've arranged them in a semi-circle and placed some Walk-Abouts where actors would stood to once again break up the space. In the actual theatrical production the panels were meant to be the backdrop in the show. In this presentation they are to be the focal points.
Posted by jlfranklin4 at 6:55 AM No comments: 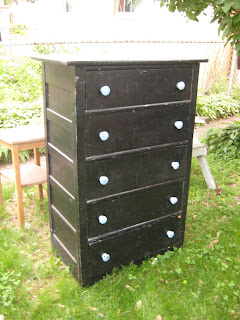 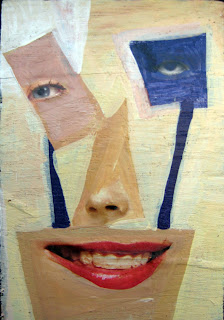 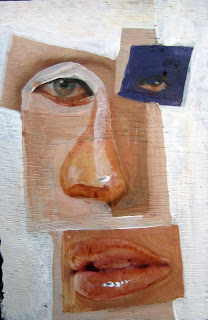 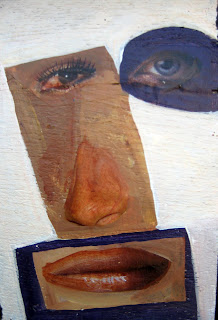 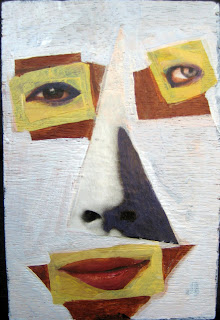 I do most of my furniture shopping in the alley and about twenty five years ago I found an old dresser that I took home. All I had at the time was a lot of black paint so that's the color I painted it. Eventually I painted the top and the handles light blue. It was used at various times by all of my kids but eventually ended up in the basement in my studio where it occupied a central location as a repository for my daughters' Barbie Doll collection and community. As one would expect, as my daughters grew up they visited Barbie less and less, and finally not at all. Meanwhile, the dresser remained where it was as my own clutter grew around it.
Recently as I was scrutinizing my studio's limited storage space I realized that if I removed the dresser I could actually create a lot more space. After so many years it was difficult to contemplate but with a heavy heart I placed Barbie and all her friends and contents into a plastic bin and emptied the dresser which I then took outside.
The dresser was quite old when found it and showed its age even more in the daylight. I couldn't bear to leave it in the alley destined for a landfill. But on the other hand because of its rickety condition I couldn't give it away either. So, what to do? As I was leaning on it one of the lose panels came off and before I knew it the old dresser more or less came apart with much of a fight. I kept the drawers because they were still in good condition and I noticed that there was not a sign of particle board anywhere to be found.
As I looked at the sides of the dresser they actually looked like small shelves, just big enough to support some smaller pieces. As I looked at some of the panels that had come off the back of the dresser I realized that if I cut them into squares they would fit on perfectly on the shelves. And that’s what I did.
But what to do with the squares once they were cut? A few months ago I had created some collages made from cutting apart pictures that I found in my daughters’ discarded Cosmopolitan magazines ( I assured them that I only looked at the pictures and read the articles). I loved the results. Using only the eyes, noses and mouths that I cut out magazines I painted and created collaged portraits that were at once cubist, abstract, and surreal, and quite beautiful, or so I thought. I decided to repeat the exercise using the wooden squares
What pleased most was that in the end the dresser was not discarded or wasted. Every bit or almost every bit of it was transformed into something entirely new, a different kind of energy.
Posted by jlfranklin4 at 7:03 PM No comments: