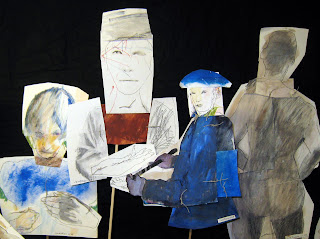 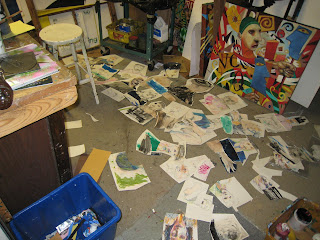 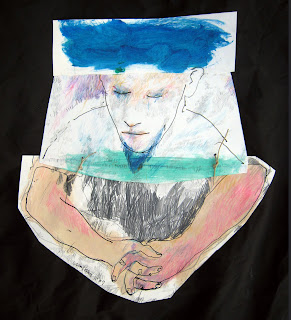 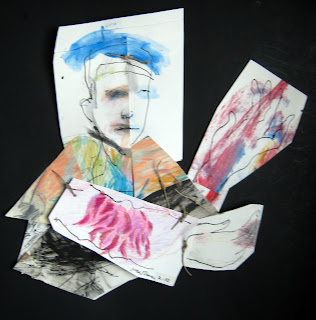 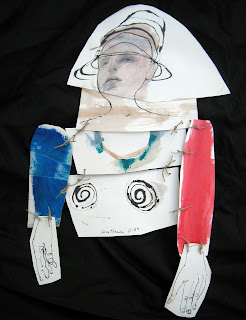 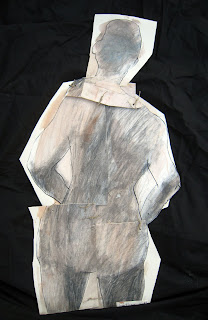 I have always viewed my work as ongoing conversations, as works in progress and therefore always susceptible to change, sometimes with a capital C. As a writer might find him or herself constantly editing words over time, so too do I as an artist. I feel compelled to return to my work not only as a point of reference but as a point of departure as well.
I had accumulated dozens and dozens and dozens of drawings over the years: pencil, pen and ink, water color, acrylic, all works on paper. Some I felt were resolved but others, in spite of all the years, did not age as well, or at least my taste had evolved and I was not satisfied with what I saw. During the past 10 years I had begun experimenting with collage, initially cutting apart older etchings, and then some of my drawings as well. But about 6 months ago I decided to try something completely different. Instead of cutting works apart and then reassembling them again with glue I decided that I would tie every part together with a three inch piece hemp string. I call the drawings Remnants because they were assemblages made entirely by tying all of the ‘remnants’, the disparate parts, together. I completed all of the pieces in a fit of creativity over the course of one month, and discovered that the sum of all the parts makes each piece whole again.
Posted by jlfranklin4 at 8:02 PM No comments: 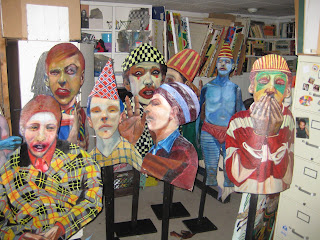 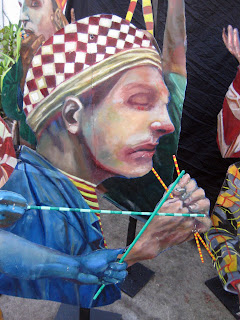 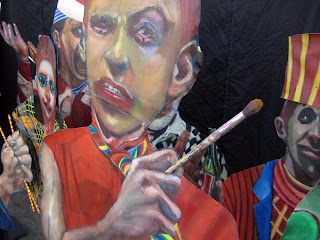 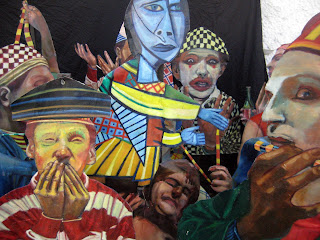 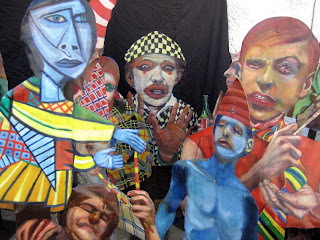 Many years ago the owner of high end, period furniture store and gallery stopped by my studio for a visit. Although he enjoyed my work he thought that an exhibit of paintings would distract too much from the store’s focus, the furniture. As he was leaving the studio he noticed a painted figure hanging up in the corner. It was a piece that I had cut out of a painting that was damaged after being accidentally torn. I ended up cutting up the canvas into smaller canvases but kept whatever figurative fragments that I could. I initially dismissed the piece as nothing consequential but he said if I had more of them maybe we could build a show around them and hand them up around the furniture as installations. And that was that.
I eventually created a whole gallery of these figures that were suspended in different configurations amidst the furniture and all over the gallery. It was like walking into a theater full of the actors `in tableau. After the exhibit closed the question was what to do with all the pieces. They were too big to place in file drawers and to flimsy to store upright so I decided the next best place would be to sandwich them between the beds and mattresses in our house. And that’s where they remained undisturbed for the next 20 years.
A couple months ago, I decided to revisit them and discovered that that some had not aged well, some were in need of repair, still others were in reasonably good shape. I was going put them away again but then it occurred to me that, in actuality, these pieces had actually anticipated my work with collage by a good decade. In many cases I had glued various pieces of canvas together to create collages. Suddenly I began to see these pieces in a new light.
I brought them all down into my studio and began to repair, repaint, and rework each one, not really knowing what I would do with them when I finished. I just knew they needed some new ‘love’ after so many years of being hidden away. I ended up building some bases that allowed me to set them up as freestanding pieces and within a short time my studio was becoming more and more crowded as more and more figures began to assemble.
I call them ‘Walk Abouts’ and for now and for the time being, and for the sake of my very limited space I have suspended them all together on a clothes line. And there they will remain until a new venue finds them. It’s better than being sandwiched under mattress any day.
Posted by jlfranklin4 at 9:05 AM No comments: 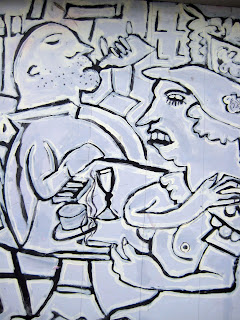 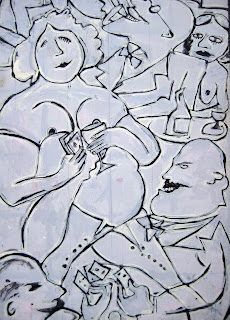 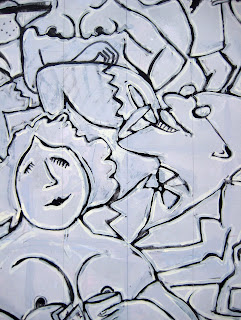 A few years ago I had the opportunity to design the set for a production of Bertolt Brecht and Kurt Weill's 'Three Penny Opera' produced by Paul William's Chicago Opera Group. We had the usual budgetary and stage limitations to contend with. The set needed to be light and portable but edgy at the same time. I built a 10' crucifix that doubled as a clothes rack, a 10' gallows, a 10' long fence, a large shuddered window that opened and closed as well a door and door frame. But the most memorable pieces that I built were the a series of 8'x4' styrofoam panels based on pen and ink drawings by George Grosz, the German Expressionist, who was commenting on the material excess, greed, decadence, and debauchery that he perceived was so pervasive in undermining society at the time of the Wiemar Republic in the 1920's. The panels served as backdrops that were moved around on stage in various combinations. On their reverse sides they were painted as black brick walls which when lined up together were quite convincing.
Posted by jlfranklin4 at 7:19 PM No comments: