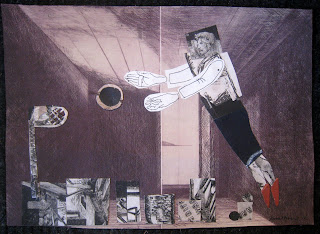 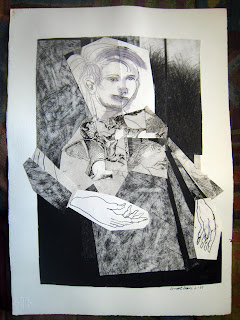 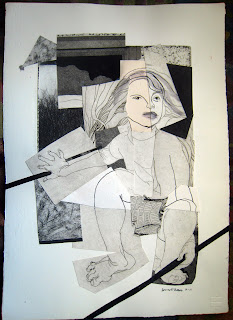 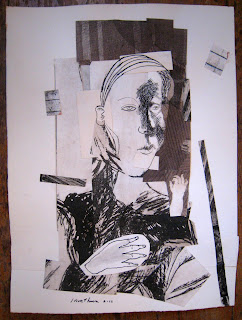 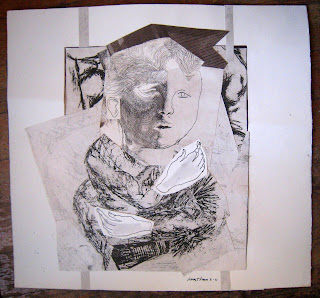 30 years ago I worked in a printmaking studio. My income was almost barely above water, but over the course of the two years that I spent there the amount of work that I created was as big as a ship. I began first as a student, then as an assistant and finally as a master printer. One of the perks of printing someone else’s etchings was that I got to keep one sample called the printer’s proof, or p.p. Over time I accumulated quite a collection of printer’s proofs. Some I liked. Some I liked less .

Over the past ten years I have been using my own etchings to create collages. But recently , much to my surprise, I discovered that my ‘inexhaustible’ supply of etchings had all but dried up. Aside from the five or six pieces that I reserved from each series there were no more extras to choose from. I had reached the bottom of the barrel. All that remained were my printers proofs which sat undisturbed gathering dust in a drawer since I first printed them …..Until now.

Gradually, an idea began to inkle above my head. Could I, would I consider ‘violating’ any of these printer’s proofs? Cut them apart, use them for myself? Hmmmm. It was an interesting dilemma. Would I daretouch another artist’s work by cutting it into pieces and then use the pieces to incorporate into my own work? I vacillated….but not for long. Many of the proofs were aesthetically (at least to my eyes) problematic---objectively, they were not very good. Still, they were the result of someone’s time and imagination. Who was I to tamper with them? But after a few back- and-forths I finally rationalized the situation by figuring that after over 30 years the artists who had created the etchings would probably not miss them, especially since they were printer’s proofs, technically not even part of the final edition.

So very quietly I picked up a pair of scissors and with the aid of a pen, some ink, and glue I incorporated the etchings into the creation of what became my final etching collages.

And with these pieces my etching collage career came to an end. The supply lasted me almost 30 years. You would think there would be some kind of pomp and ceremony to mark the occasion. After all, it was the etchings that brought me to collage which has become such an integral part of my work ever since. So alas, all the deeds have been done. I guess you could say that I have now finished this particular picture.