Over a decade ago I was hired to do some mural projects  on the viaducts opposite the with the children who lived Hephzibah Childrens Home.    I realized that if I could do childrens murals on the viaducts why not try to create something of my own.  I requested permission from the village and prepped three cement viaduct panels near the intersection of a busy street in Oak Park, thinking if nothing else at least I might attract some attention and get more work.    I painted a mural that featured three heads based on some of my own paintings.  The plan was to eventually paint at least seven more if the village would subsidize it.    The seven other portraits never materialized but the original three remained and slowly aged.
A couple years ago the village began to commission artists to create murals on other viaduct panels and I was fortunate enough to add two to the collection.  Meanwhile  I would see my original three heads looking more and more forlorn as the  colors faded.   I had asked periodically about funding for  restoring the mural but nothing ever came of it.    Finally on an impulse I decided to act once again on my own.  I called for permission to work on the three heads, since the expense of time and materials were my own, there was no objection.
I spent about three full very hot days modifying, repainting and throwing new colors at the images.  In short they were brought very vibrantly back to life.   But not only that, they took on a whole new significance do to my acquaintance with a man named Mike, who strolled up to me as I was working.   Mike confided in me that he not only was homeless, but ‘mentally retarded.’  He also said, in addition to really liking the mural, that he had never  painted before and  asked me if there was anything he could work on.  I looked around for something he could help me with and decided that he could paint in some accent lines for me.  He worked very carefully and  was very conscientious about not making mistakes which I assured him would not be a problem because it was only paint, and paint could always be painted over.  We worked together for a bit before I finished for the day.  And then he asked what we were doing the next day.   I arrived very early in the morning in order to avoid the worst of the heat and just as I was finishing up Mike arrived.  There were a few sections that  I had intentionally left  unfinished in order to let him complete them which he did.  It was fitting that he finished up just as I was putting the finishing touches on the title  that I was painting on  the mural.   I called the newly restored  heads  ‘The Three Mikes.’  Mike was so proud to see his name inscribed that he flagged down a number of passersby to make sure they didn’t miss the connection.  And I helped too.
It is a great ending to well deserved adventure. 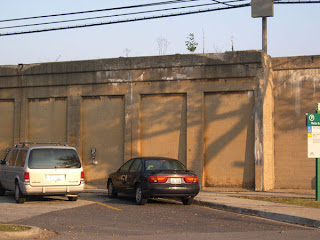 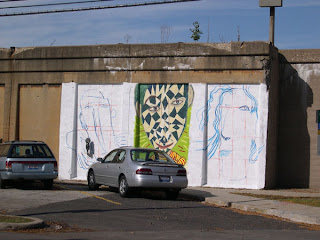 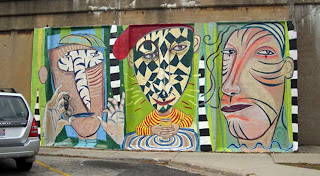 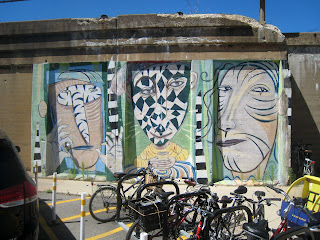 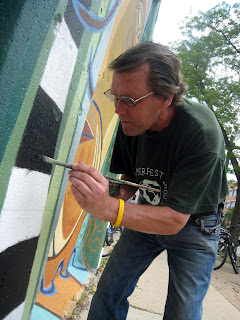 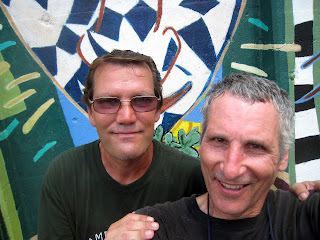 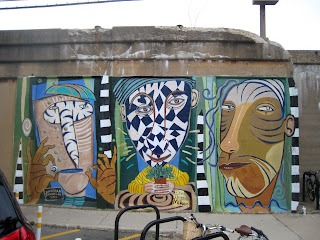 Posted by jlfranklin4 at 6:19 PM No comments:


I had responded to a call for submissions for a new round of viaduct murals to be commissioned in Oak Park similar to what I pursued a year ago.  As in last year’s request my first submission was rejected but my second was accepted.  It was based on a painting that combined elements of realism, abstraction, and cubism.
Immediately after I was assigned my viaduct panel I went to work beginning around three in afternoon.  I quickly discovered that my 6 foot ladder was woefully inadequate to tackle a 12’ high wall.  So painted what I could on the first day and borrowed my neighbor’s extra long extension for the rest of the project.   By loosely gridding and transferring the image I could begin very quickly.   I worked for 3 hours in the heat and thoroughly exhausted when I got home.   The second day was back working by 6:30 am and continued nonstop until the rain washed me away.   But as soon as I got home the sun returned with a vengeance.   I had planned to return and finish up the following day but seen as it was only about 1:30 pm  I decided to return to the wall.   I finished everything up a few ours later and applyied two coats of clear varnish for protection.  It was a very quick run.

So why the title ‘Katie’s Wahl’? An older man had been watching me work on the mural from across the street.  After a short time he approached me and asked if he could speak to me.  As climbed down the ladder I could see that he appeared to be somewhat distraught  as if on the verge of tears. I  asked him if he was all right and he apologized and seemed to be looking for the right words to reply. Then after a few moments he confided that his daughter had suffered a devastaing accident just a few days earlier and was currently in the hospital.  I asked what happened and he told me.  Apparently she had been injured in a diving accident and was now completely paralyzed.  He kept apologizing for his obvious grief and I felt completely at a loss for words.
Then as he apologized again he  made an unusual request.  Somewhat embarrassed he asked me if I might be able to insert his daughter’s name somewhere in the mural.  I vacillated for about half a second.  "Of course," I said, "of course,  yes."
He told me that her name was Katie.  As he left I asked him what his last name was and he said Wahl.   Katie Wahl.   Suddenly the significance of the  mural  took on new meaning. I  decided to add  Katie's name to some geometrically intermingled patterned shapes, like pieces that may be fit back together again.  I don’t know this young woman but I decided to dedicate the mural to her and called it ‘Katie’s Wahl.’ I hope she will be able to visit it one day. 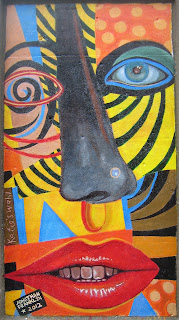 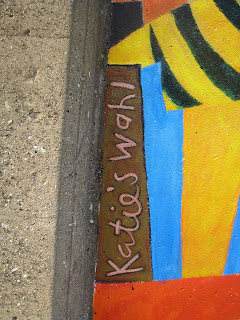 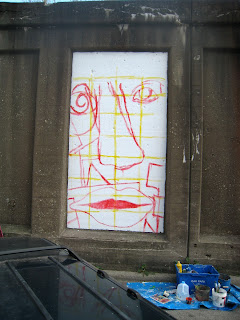 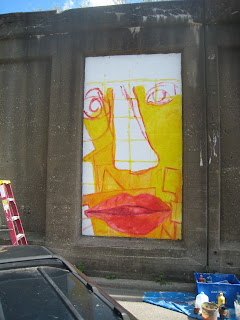 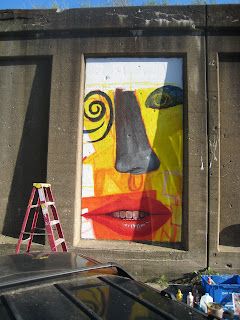 Posted by jlfranklin4 at 7:22 PM No comments: