The Meandering Life of a Painting 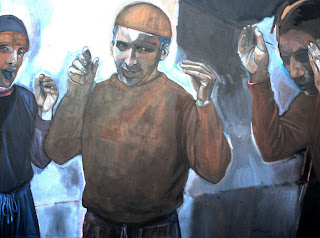 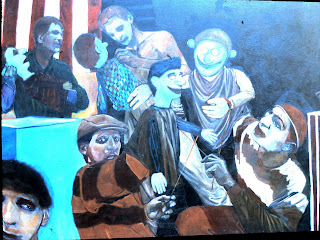 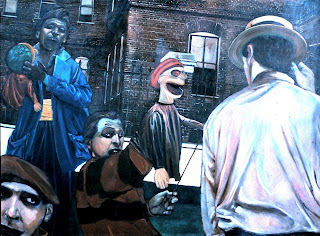 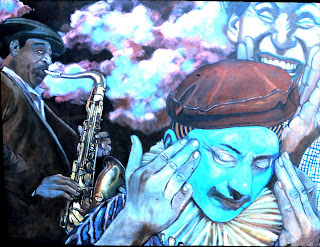 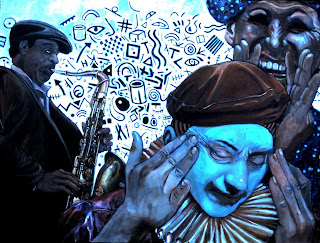 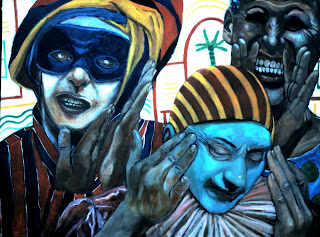 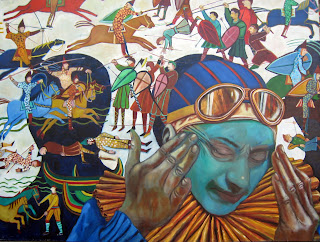 The Meandering Life of a Painting
Whenever I believed that I had ‘completed’ a painting I would engage in a ritual that I practiced for well over thirty years. It required that I set up my heavy free standing masonite panel somewhere in an evenly shaded patch of ground, drape a black cloth down the front of it, bang a nail in the center, hang up the painting, and sometimes enduring a full range of weather conditions, snap four Kodachrome slides and then repeat the entire process with a role of Kodak 100 print film. It was a tedious sometimes arduous process that had me constantly battling the wind and flapping cloth panels, or snipping away frayed or errant strings of canvas. I could really have used an assistant. A week or so later I would get the pictures back only to discover that the images were flawed because I forgot to adjust the camera properly.
And then everything changed over night with the advent of the digital camera. Actually I was a bit of a slow learner. I still persevered with my traditional set up, slides and prints until I could no longer find people to process them any longer. Suddenly I was left with only one choice : the digital camera. What surprised me above all else was easy life as a photographer suddenly became. Suddenly there was no need to set up anything in order to photograph the paintings. I could shoot pictures virtually anywhere and then crop them and make other adjustments on the computer. If the picture was flawed I could easily rephotograph and upload it in moments instead of weeks.
Since the early 1980’s when I moved to Chicago I had diligently been documenting my work. As I had said earlier whenever I completed a piece I would try to photograph it. However in almost every case I would no sooner see the slide than I would detect some compositional flaw that needed addressing. Once correction would reveal the need for another correction and over time completely new image would evolve and on and on, With all the changes and constant rephotographing I began accumulating hundreds and hundreds of slides that marked the progression of virtually all my paintings.
Although slides are wonderful, they are useless without a projector. And that’s why I have decided to digitize them.
These images that you see represent of a few but by no means all of the stages of development of a particular painting that I've been working on off and on since 1985. You can see how the image has twisted and turned over the years. Ironically as I revisit the various stages I feel a tinge of regret at having painted over what looked to be a perfectly fine painting. Yet regardless of how good or bad they were, the bottom line is that the current painting would not exist without having made all those earlier stops along the way. Although many images are now buried and invisible under the layers of paint and color, they thankfully still exist digitally and as slides, and like life, art goes on.
Posted by jlfranklin4 at 7:33 PM No comments: 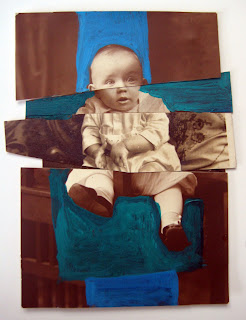 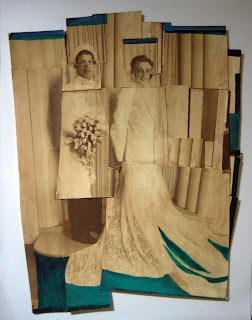 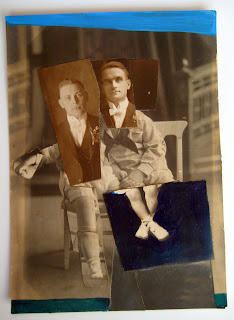 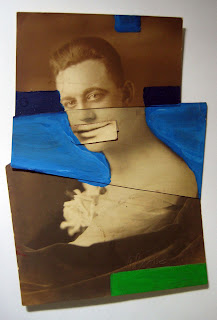 A number of years ago on one of my daily alley junkets I came across an old cardboard box next to a dumpster. It was full of cards of some sort but when I picked one up I discovered that it was an old photograph. As it turned the box was full of photos that someone must have thrown out. They may have come from an old photo studio.
The pictures, themselves, looked as though they were from the early 20th Century. All were black and white and sepia, and the thought of them being tossed into a landfill or destroyed in the rain was too much to bare. So I brought the box home and stashed it on a shelf until I could figure what to do about them. I saw them as time markers that needed to be protected. I thought donating them somewhere.
But over time as I would study them I began to see them differently. I had already begun to cut apart many of my old etchings and drawings and turning them into collages. Why not experiment with these photographs as well? At first I was tentative. They were quite valuable (at least to me) and fragile after all. But the more I cut the more interesting the results. I literally mixed and mashed parts and pieces of photos of people from different periods, genders, and ages together to create entirely new and strange identities.
Posted by jlfranklin4 at 8:11 AM No comments: 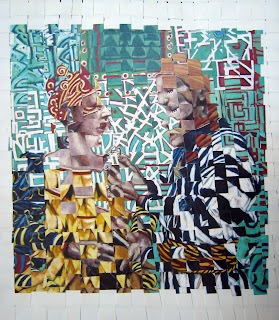 A couple years ago I had somehow gotten it into my head that I should print up some giclee (art) prints. I figured that people would be willing to spend $25, $30, or $40 for an art print of a painting rather than several hundred or even a thousand... dollars for an original. That was the idea. In theory it sounded good. I had done some research and thought I was making a sound decision. The long and the short are that I ended up spending a huge bundle of money. Needless to say, the results were hardly satisfactory. I was so disappointed and frustrated by the way they looked and by the whole mess that I couldn't bear to even look at them. Just seeing the box of them stashed in the corner of my studio reminded of yet another one of my misbegotten artmaking misadventures....until a light bulb went off in my head.
As someone who is committed to recycling, regenerating, and reinventing things it suddenly occurred to me that there might be life in those dead prints of mine after all.
Armed with a pair of scissors I decided to make some major alterations. It meant that I would literally have to cut the prints apart, cutting them into strips. Then weaving them back together they became transformed into something entirely different and quite exciting. Diffused and abstract yet still recognizable and accessible, they reminded me of seeing objects through a distorted panel glass. I now have over forty of them and each one is a slightly different variation of the same theme.
Posted by jlfranklin4 at 10:34 AM No comments:

Six months have passed since last I checked in. Lot's of new work, a new website. Where to begin, where to begin?
Posted by jlfranklin4 at 10:32 AM No comments: