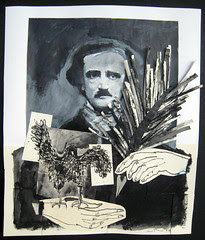 muse
Originally uploaded by jonathanfranklin65
Posted by jlfranklin4 at 9:40 PM No comments: 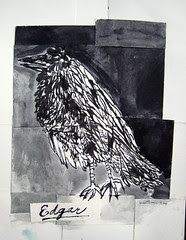 Edgar
Originally uploaded by jonathanfranklin65
Posted by jlfranklin4 at 9:39 PM No comments: 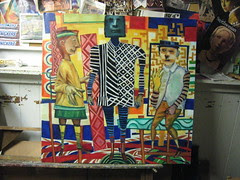 Posted by jlfranklin4 at 9:23 PM No comments: 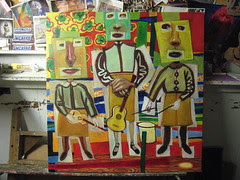 Well, I've been staring this piece down for a couple weeks and finally figured out what was annoying me. I'll leave it up to you to look for the changes: nothing too big but enough to make a difference, at least to me.

Posted by jlfranklin4 at 9:21 PM No comments: 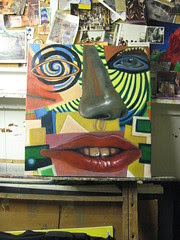 This could be the final stage in the evolution of this painting. 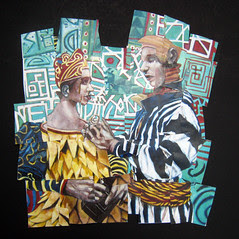 A couple years ago I had somehow gotten it into my head that I should print up some giclee (art) prints. I figured that people would be willing to spend $25, $30, or $40 for an art print of a painting rather than several hundred or even a thousand... dollars for an original. That was the idea. In theory it sounded good. I had done some research and thought I was making a sound decision. The long and the short are that I ended up spending a huge bundle of money. Needless to say, the results were anything but satisfactory. I was so angry, frustrated, and disappointed by the way they looked and the whole process that I couldn't bear to even look at them. Everytime I'd see the box of prints in my studio it would stand as thick reminder of yet another on of my misbegotten artmaking failures...until yesterday.
As someone who is committed to recycling, regenerating, and reinventing things it suddenly occurred to that there might be life in those dead prints of mine after all.
Armed with a pair of scissors I decided to make some major alterations. I decided to cut the prints into strips and then weave and reassemble them back together again. In short the were.... well, you decide.

Posted by jlfranklin4 at 6:55 PM No comments: 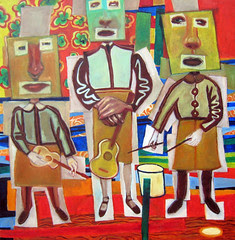 This is obviously a painting. It is oil painted on canvas, somewhat abstract, and very colorful. But check out the process of how it evolved from the very beginning to the end. I photographed it after every sitting or when there were some noticeable enough changes.

Posted by jlfranklin4 at 4:04 PM No comments: 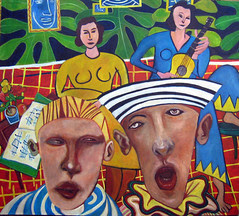 I am very good at appropriating, especially from artists that I admire. In this case, I have shamelessly borrowed from Matisse. This painting literally took me years to paint so there are many layer of images that sacrificed themselves for the betterment of the picture that you now see. 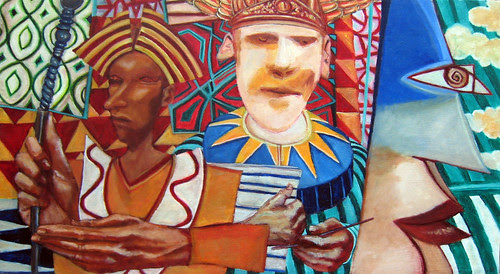 I am new in the business and this is my first attempt at 'blogging.' Since I will probably be showcasing a bit of painting I thought I would pick something randomly like this piece, based on a pen and ink collage.