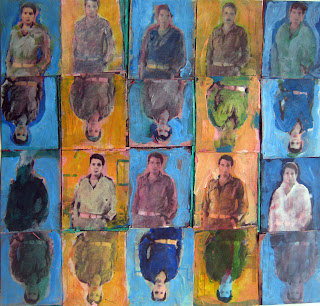 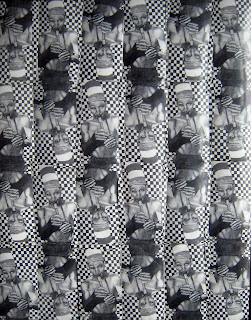 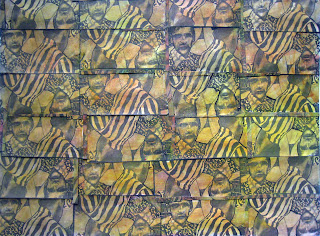 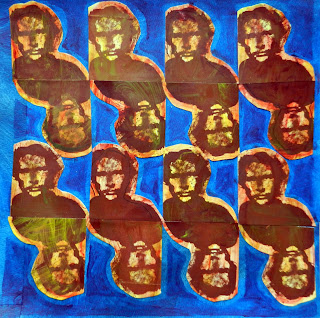 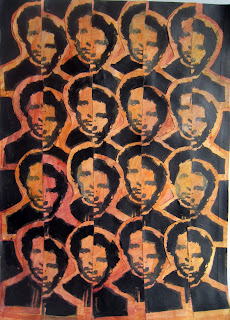 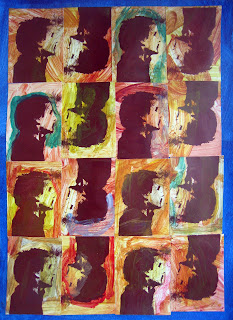 As a printmaker I enjoyed creating repetitive images that are virtually the same but for a few subtle differences. Almost any time I discover multiples I am compelled to organize them in series. I have a shoe box that contains a variety of selected exhibition announcements, some dating back 30 years. I was not sure what to do with them but because there were so many of them it seemed like a pity to throw them away. And I’m glad didn’t because a few days ago I pulled out the box again and decided to play around with them again.
I few years ago I had taken some of these same cards out, cut them up and arranged them into repetitive tessellated patterns just to see what they looked like. I liked what I saw. But then I put the show box away and forgot it, and the dozens of cards in the box.
Recently I pulled the box out again and contemplated the cards with fresh eyes. I made some beautiful little samples with water color and ink and collage. The first two series I created were called ‘Lins’ and ‘Strips’. But then as I studied all of the multiples they reminded me of tessellations and how repetitive images and shapes lead to quite exciting and unexpected patterns. These pieces are some of the results.
Posted by jlfranklin4 at 12:10 PM No comments: 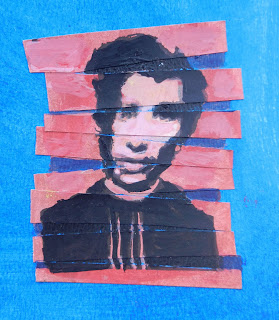 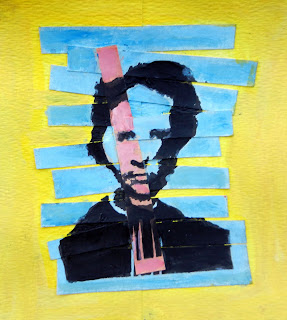 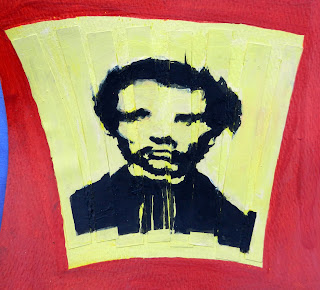 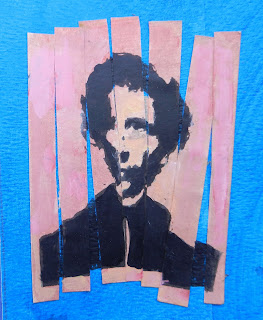 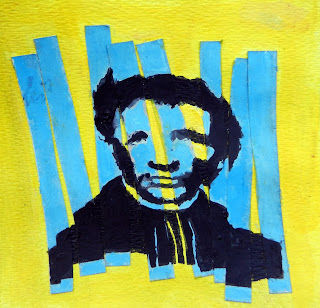 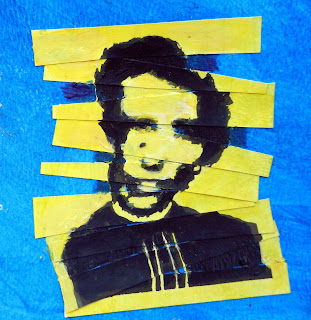 From the same stash of postcards from a long ago exhibit of mine which featured a black and white photocopy of me and that I also used to create the Lins, I thought I would experiment once again with the elements of dissonance and distortion. I am fascinated by how even when using the same components, in this case cutting the photos into strips, I can drastically manipulate the shape and appearance of the image simply by how I arrange and organize them.
Posted by jlfranklin4 at 10:40 AM No comments: 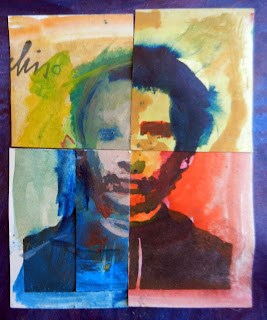 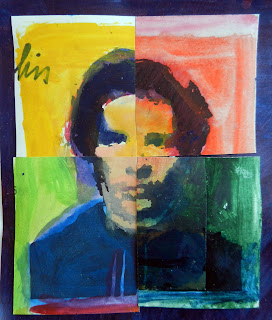 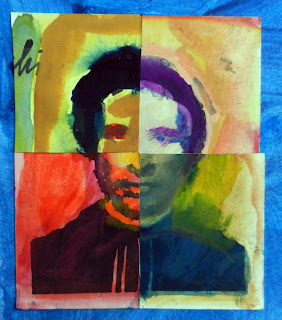 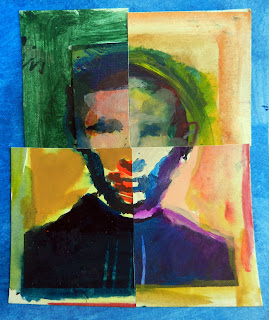 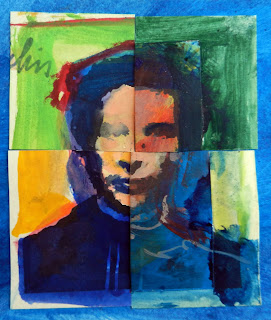 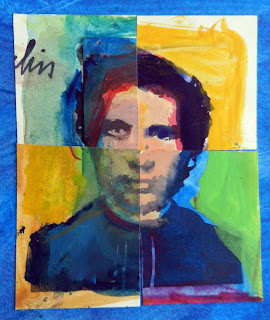 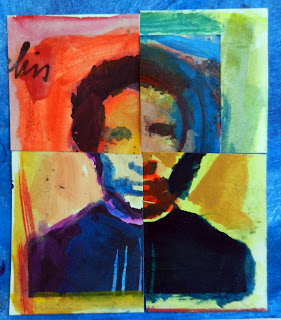 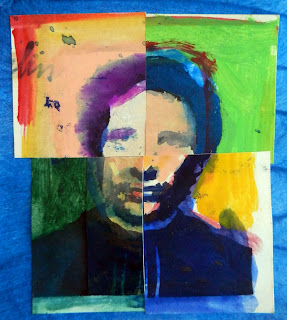 I rediscovered some very old postcards in box that I had used for an old exhibition announcement. It was a small 3”x 3” photo portrait of me that I had had copied in black and white. Since there were so many of these postcards I decided to do some water color experiments on them, creating a series of portraits. Although I enjoyed the spontaneity of the initial results I was more interested in creating the kind of tension that I feel is more engaging. I cut the portraits into for and then mixed up the parts and reassembled them. This diffused element of discordance is something has begun to permeate much of my work both on paper and canvas. It is sense of finding order in potential chaos that I find so challenging.
The pieces are called Lins because my name, Jonathan Franklin, appears on the postcards and l-i-n are the only three letters that remain of my name after I cut out the portraits.
Posted by jlfranklin4 at 8:56 AM No comments:

The Genesis of the Collage 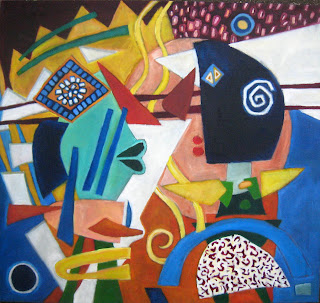 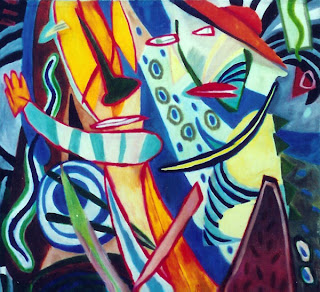 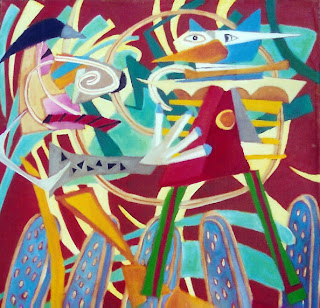 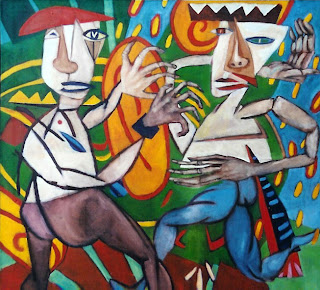 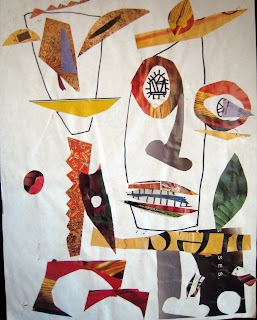 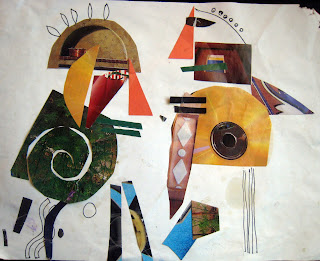 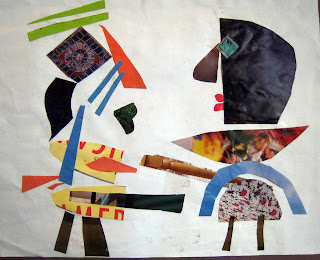 About 15 years ago I was sitting around with my kids doing cutting up magazines and doing crafts to make collages. I loved the random, unselfconscious spontaneity of they created. Being the ‘figurative’ kind of guy that I am, my pieces looked like naïve attempts at cubism. At that time I was beginning to feel a little stifled in terms of my own subject matter. Years before someone had suggested that maybe I should bring the background forward in my paintings and have the figurative subject matter recede into it. I was exploring patterning and shapes.
But these collages were entirely different. With their colorful geometric forms they became abstract. I was intrigued and wondered what they might look like as paintings. Unlike my typical nonlinear organic method of painting most of which was by trial and error the subject matter of these collages was already resolved. It was an entirely different process for me. To create the compositions all I needed to do was directly copy the collages. There was practically no thinking involved, like painting by numbers.
And thus I departed into an entirely new direction, leaving my representationalist (realistic) edge behind. At this same time I was also (lackadaisically) represented by a gallery who when I invited the director over to see my new work he was underwhelmed by it to say the least. It was still figurative oriented but abstract and far less literal than what he had expected of me. The result is he dropped representing me almost cold turkey. So much for loyalty.
It took me a couple years to work through this experiment. As the process evolved I found that I was willing to stretch my creative boundaries, to explore a broader range of ideas. In the end my cubist ‘bender’ directly affected how I reassessed not only my older work but how I was able to reintegrate this vision into everything that followed, not only in my painting but in particular my work on paper, almost all of which now involves the use of collage.
Posted by jlfranklin4 at 7:27 AM No comments: